This allows you to run a real terminal emulator on the palm pre locally. The disadvantage is that you need to stop the phone GUI first, and do a bit of setup.

These are rough notes; I plan to make this much prettier over the weekend, but of course wouldn't object if someone beats me to it.

1. Set up a debian testing chroot environment, and then chroot into it. You can use the debian stable chroot environment as a base, and then just upgrade to testing. 2. Set up directfb in the chroot. Be sure to include the "no-linux-input-grab" line in your "/etc/directfbrc" file. 3. Install build-essential, build-deps for directfb, and pkg-config 4. Compile lite - http://www.directfb.org/index.php?path=Platform%2FLiTE - and then dfbterm - http://www.directfb.org/index.php?path=Projects%2FDFBTerm - from CVS sources. Alternatively, grab .debs from http://dclark.us/palm-pre/dbfterm/ 5, In addition to the mounts listed in debian, you will also need to:

Here is a screenshot that also describes some of the work left to do: 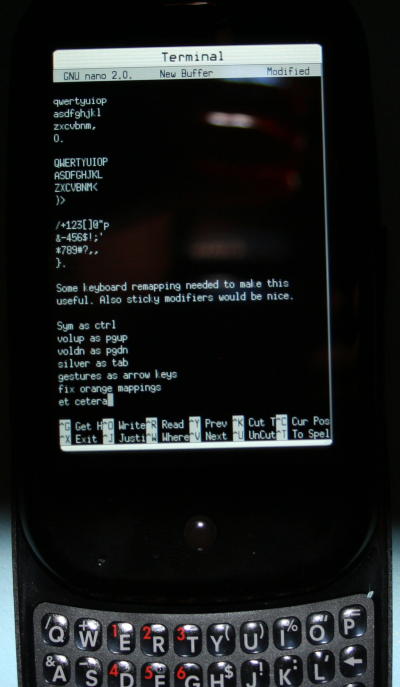 Note that if you don't tell directfb "linux-input-devices=/dev/input/event1" it won't use this keypad. Adding this line to "/etc/directfbrc" seems to make things just work (and you don't seem to need to explicitly include event2 as well, but it couldn't hurt)

Make use of the touchscreen

It would be great to be able to run DirectFB applications and LunaSysMgr at the same time, and switch between them. I haven't found a way of doing this yet, but here are the possibilities I've found so far:

Prereq to most of these would be rebuilding linux from source, which is here: http://opensource.palm.com/packages.html