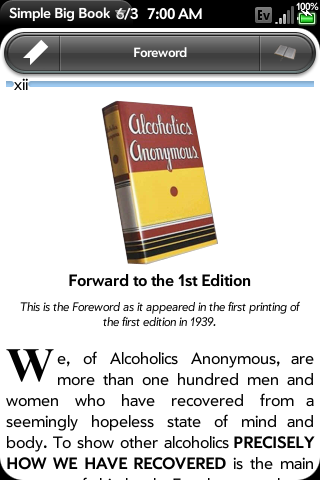 Simple Big Book is an application which presents you with the first edition of the A.A. Big Book originally printed in 1939. The code for this app was originally from Simple Bible. It was re-worked into Simple Big Book by Rick B and John K, but had become largely abandoned. It is being dusted off, getting issues fixed and having features added.

The git version is receiving continual updates as things are found to be wrong (typos in the text, etc.). Features will continue to be added as they are thought up and/or requested.

While I've fixed a lot of the usage hindering issues, a couple still remain that I will fix once the basic framework of the app is solid, which is not far away.

The official App Catalog Version can be found in the App Catalog on your device, or through this web page. The git version (raw source) can be downloaded by using git on your computer:

The first edition of Alcoholics Anonymous is in the public domain. This version contains the foreword, the Doctor's Opinion, the front sections, and Dr. Bob's story from the first edition. The page numbers in this version correspond to those in the third and fourth editions. The stories in the back of the third and fourth editions of Alcoholics Anonymous are copyright by the AA World Services Inc and by The AA Grapevine, Inc. AA has not given permission for the distribution of those stories in this form at this time.