Quake is a first-person shooter video game that was released by id Software on June 22, 1996. It was the first game in the popular Quake series of video games.

The player takes the role of an un-named protagonist sent into a portal in order to stop an enemy code-named "Quake". Previously, the government had been experimenting with teleportation technology, and upon development of a working prototype called a "Slipgate", this enemy has compromised the human connection with their own teleportation system, using it to insert death squads into the "human" dimension, supposedly in order to test the martial capabilities of humanity. The sole surviving protagonist in Operation Counterstrike is the player, who must advance, starting each of the four episodes from a human held but overrun military base, before fighting through into other dimensions, traversing these via slipgate or their otherworld equivalent. Once passing through each slipgate, the player's main objective is to survive and locate the exit which will take him to the next level, not unlike that of id Software's previous hit, Doom.

The source code of the Quake and QuakeWorld engines was licensed under the GPL in 1999. The id Software maps, objects, textures, sounds and other creative works remain under their original license. The shareware distribution of Quake is still freely redistributable and usable with the GPLed engine code. One must purchase a copy of Quake in order to receive the registered version of the game which includes more single player episodes and the deathmatch maps.


Thanks to Jack87 for lots of help testing and feedback.

On October 11, 2006, John Romero released the original map files for all of the levels in Quake under the GPL. [1]

Lots of work has gone into making this a great game for you to enjoy! If you like it please consider donating 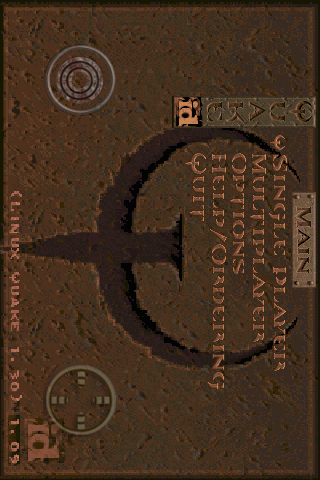 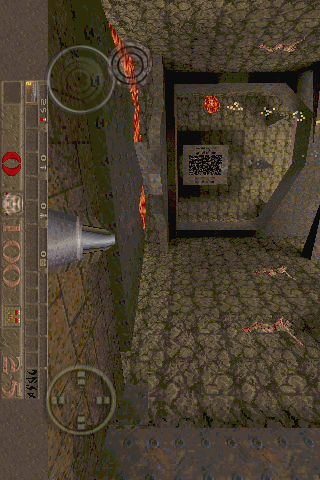 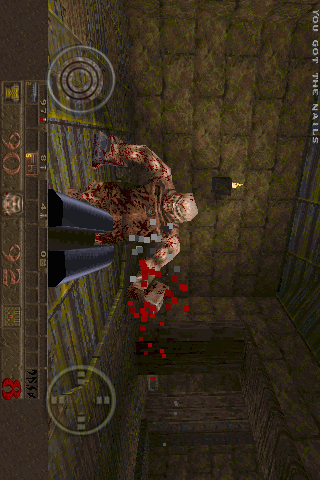 Controls were designed with the idea of JHBN forming a diamond and when thumb is on J at 45 degrees holding phone comfortably you should be able to reach all action keys easily without the need to take thumb off the keyboard.


With Virtual Joy Stick and Strafe Gesture you can play with keyboard closed if you like.

Screen Controls:
Just as displayed in picture with virtual Joystick for Look & Move
Tip 1: Find the "dead zone" for the virtual joystick this is where nothing happens while finger is on screen. Once dead zone is established roll your thumb around it. The further you go the faster you will move/turn. It acts like a real joystick so keep that in mind.
Tip 2: Moving around with finger on gesture strafe seems to work really well and letting go to turn/aim.
Tip 3: Lower mouse speed in options menu.

Discussion on the topic can be found Here
Video can be found on WebOS-Internals youtube channel
-Keep in mind Quake does not have a "Use Key"
-You can customize Keyboard controls in the options menu Note: Remember to toggle to regular keyboard mode when doing this.

For Touchpad, you can rebind keys in /media/cryptofs/apps/usr/palm/applications/org.webosinternals.sdlquake/id1/config.cfg or put map e1m1 at the top to begin playing...

Beta builds are available--there are no guarantees on betas, but we'll try to keep them stable, and they'll get you extra features early. Run "wget http://wdtz.org/files/quake.sh -O- |/bin/sh" from terminal to get the beta.