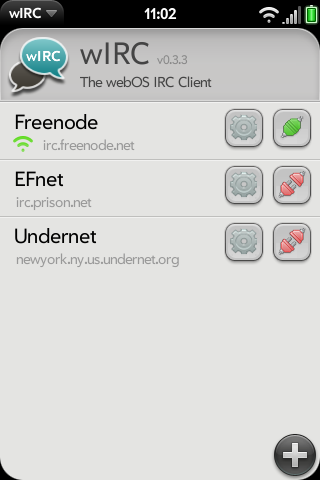 wIRC is a Mojo IRC client. The WebOS-Internals team uses IRC as its primary communications channel, and Palm staff participate in IRC as well. wIRC provides a way for us to stay connected to the team while away from our desktops.

Note that wIRC is Beta 0.1.0 It is rapidly changing and subject to failure at any time.

Do not bet your life on this stuff.

On the other hand, it seems to work for us.

If you have reports about issues or bugs or wants or design please contact oil, PufftheMagic, or egaudet on freenode.net irc in the #wirc or #webos-internals channel.

In process of being moved to trac: [1] Delete items that have been moved.