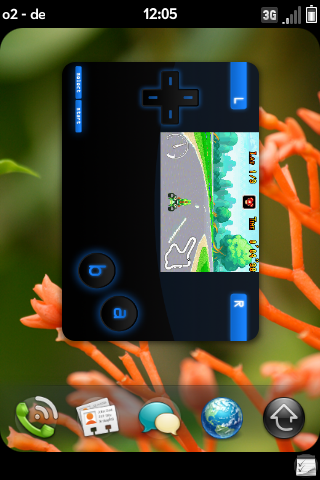 Install Preware, and then launch it. Click on "Available Packages" then "Applications, or "Available Applications" then "All" depending on the Preware preferences you have chosen. Now type in "visual" (no quotes). VisualBoyAdvance should show up. If not, make sure your feeds are up to date. Click on VBA and then click install. You will probably have to install other services as well (it will tell you if you do).


Now you are ready to add ROMs(games)!

If you find a ROM image which has a ".bin" extension just rename it to the proper extension(for example, rename a gameboy advance game to end with .gba without quotes)

Once you have installed VBA on your Pre via Preware, click on it from the launcher to open it for the first time. This should create the necessary folders for the ROMs.

Now connect your Pre to your computer via USB mode. Once the Pre shows up on your computer, open it. You now should be at the "root" of your Pre's storage. If you look at the folders in the root, there should be a few including the "wallpapers", "ringtones", and most importantly, "vba" folders. Click on that and then the "roms" folder. Copy the ROMs from your computer and move them here. DO NOT put the ROMs (.gb, .gbc, .gba) in folders within the "roms" folder.

If you don't see a "vba" folder, but you do see a "wallpapers" and a "ringtones" folder AND you know you installed VBA properly, go ahead and create the necessary folders. Create one at the root called vba (must be lower case). Then make another one inside that called roms (again, no caps).

When viewing the "roms" folder in USB mode, you may also see files for saves (.sav) and screen captures. That's normal.

As of 1.1.0, there is zip file support. Rom files may be stored inside a zip file.

You can now customize the controls!

To start customizing, while running a game, hit '=' (orange+p).

To stop the binding and cancel, hit '=' again.

Note Due to the pre's keyboard limitations, some keys cannot be detected when pressed down at same time (j/k is an example of such a pair). Keep this in mind.

As of version 1.1.1, there is now skin support. Shipped by default (as of this writing) are skins from VincentLaw, zsoc, nights0223 and crzisme.

All skins go in /vba/skins.

This is a list of games and how well they run. PLEASE include a version number (on rom selector) when adding entries! To see the emulation speed percentage, hit orange+s while playing (as of 1.0.3).

If the downloaded game has a ".bin" extension just rename it to ".gba"
Retrieved from "http://wiki.webos-internals.org/index.php?title=Application:VBA&oldid=10217"
Category: