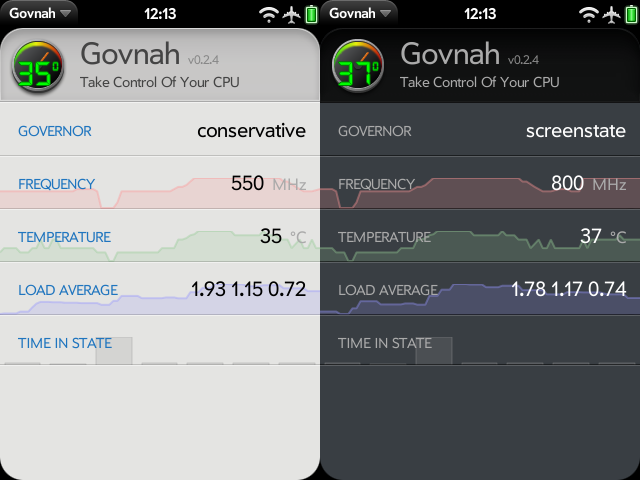 Please add documentation and frequently asked questions and answers to this page.

The kernel is the central component of the operating systems. The Uber-Kernel replaces the standard webOS kernel allowing faster speeds and greater control of the CPU. To control the UberKernel you will need to also install a "Governor" such as the Govnah. "Über" is not a technical term but the German word for super and in this case an inside joke referring to Arnold Schwarzenegger, the "Govnah". That is why the Govnah app header says, "Much better than Arnie."

This application is in constant development and testing. It should not be considered a finished product. Please note that usage of this package is very likely to void your warranty if things go wrong. Please, do not contact your carrier or Palm for support for damage resulting from this package.

WebOS Internals provides this program as is without warranty of any kind, either expressed or implied, including, but not limited to, the implied warranties of merchantability and fitness for a particular purpose. The entire risk as to the quality and performance of this program is with you. Should this program prove defective, you assume the cost of all necessary servicing, repair or correction. In no event will WebOS Internals or any other party be liable to you for damages, including any general, special, incidental or consequential damages arising out of the use or inability to use this program (including but not limited to loss of data or data being rendered inaccurate or losses sustained by you or third parties or a failure of this program to operate with any other programs).

All WebOS Internals kernels follow the 7 principles of kernel design: http://bit.ly/next-gen-kernels. The Uber-Kernel incorporates the following bleeding-edge features to give you maximum control over your phone:

When your phone reboots after a successful installation of UberKernel, you will now be running UberKernel. You can use Govnah to verify that you now can clock the processor over 600MHz. If you still cannot, refer to the FAQ below to see if any apply to you. The UberKernel Icon that now appears in your launch will only show you a (very!) informational page on UberKernel.

How do I uninstall and get back to the stock kernel?

I'm confused, my Pre goes back down to 500 after a reboot, I have to reopen Govnah to set it back to screenstate. Any reason?

That is intentional. See the 7 principles of kernel design and packaging at http://bit.ly/next-gen-kernels for details.

Once we have devised a fail-safe method of making sure that an overclocking failure caused by running your CPU outside of it's guaranteed specification limits does not put you into a reboot loop where you need to doctor your phone to recover it, then we will implement that solution for saving the CPU scaling parameter settings across a reboot.

I have installed UberKernel and when I try to launch it from the Launcher it just shows some documentation and a changelog. What's up? Is this an application? What's going on?

To use the kernel you must install a governor app such as Govnah, or be able to control the governor from command line.

My phone gets really hot during heavy use. At what temperatures should I start to worry?

This is a difficult question to answer. Over-clocking is generally uncharted territory, and as such, there are risks. One is over-heating your cpu. Another is shortening the life of your cpu because of excess heat. Note that the Govnah application measures internals CPU temperature, which may or may not be hotter or colder than battery temperature (depending on how quickly the battery is charging or discharging). The Govnah icon progresses from green to yellow to red to flames as a general indication of what we currently believe to be conservatively safe regions, but the exact boundaries of these regions are yet to be determined.

Can I use other CPU scaler applications while Govnah is installed on my phone?

Currently, CPUScalerUltimate(v.2.1.2) and Govnah can be installed at the same time.

Use any scaler application to program your speeds with UberKernel.

What is the screen state scaling?

The screen state scaling sets the CPU speed to 500MHz when the LCD screen is off and up to 800MHz when the LCD screen is on. This includes screen off during phone calls or music playback, etc. The speed is also lowered to 500MHz when the phone is charging on the Touchstone and the screen displays the clock. Options for the upper limit include 800, 720, 600, and 550MHz. There are known issues with Brightness Unlinked or the "Reduce Minimum Brightness" patch. The use of either of these to reduce the screen brightness to the lowest levels prevents the screen state scaling to trigger so the CPU may remain at 500mhz. To prevent this, set the brightness to an appropriate level that will trigger the scaling to 800mhz. The Govnah app may be used to monitor CPU speed and set the brightness to an appropriate level to enable the frequency switching.

I set Govnah to Screenstate with min/max values of 500/800. I checked the frequency after turning on the screen manually and found it back at 500. This has happened every time; can you tell me why?

Will I have to uninstall/disable anything in Uber-Kernel prior to installing an OS update?

The Uber Kernel should be completely OTA update compatible. You should not have to do anything to you Pre(+) before installing a palm update.

What should I do If Updating the Uber-kernel results in a 'failed to install' error?

I can't find Uber-Kernel in Preware, Govnah's there but not UK.

You need Upgrade to Preware 1.0 or greater. You should then see a webos-kernels feed in your Manage Feeds section; turn it on, and Update Feeds. Now you should see Uber-Kernel within Preware.

Does Uber-Kernel get rid of TMC (too many cards) error?

It doesn't eliminate this feature of webOS but it does correct an error in the math that didn't account for all the space available before triggering TMC. In addition compcache allows for more space to be available by reserving space in RAM (memory) for compressing data. In a nut shell think of it as having more RAM.

If any of the above trouble shooting Q&A doesn't apply to your situation, or you just want to talk about how UberKernel has impacted your day-to-day life, join the discussion at the official PreCentral Discussion thread.