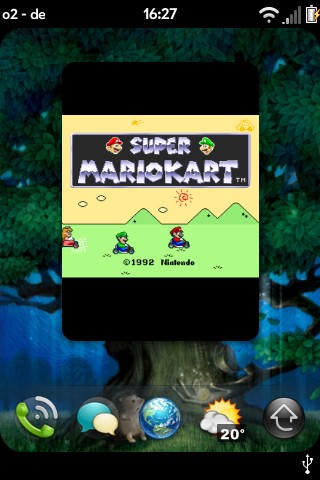 SuperNES is an emulator for the Super Nintendo Entertainment System (SNES).

Ported by Will Dietz Aug 2010.
Thanks to Sonic-NKT for beta testing, art, and videos!!!
Thanks to #webos-internals for being awesome!
Icon created by Deleket (Used with Permission)

All source is under the GPLv2 license AND the Snes9x license, and where there are conflicts the Snes9x license is the one to follow. Basically the code this was based on is under their special license, and that's that. My additions/modifictions are as GPL as they can be without infringing on their original license. MAJOR kudos to the wonderful people who created Snes9x, and to the authors of DrNokSNES, and DrPocketSNES (and the various ports that went into THAT).

And the latest SuperNES source is available on git here

Alternatively please consider purchasing VBA from the App Catalog. A percentage of the proceeds go to WebOS Internals, and helps me keep working on these things.

Install Preware, and then launch it. Click on "Available Packages" then "Applications, or "Available Applications" then "All" depending on the Preware preferences you have chosen. Now type in "superNES" (no quotes). SuperNES should show up. If not, make sure your feeds are up to date. Click on SuperNES and then click install.


Now you are ready to add ROMs(games)!

Many games are available for SuperNES. Sources of free open source and free homebrew roms are available all over the internet. Google is your friend :).

There exist sources of copyright game ROMS on the interent which webos-internals will not link to. There also exist explanations of how to copy roms you own into files which SuperNES can use. Those topics are outside the scope of this article.

SuperNES ROMs extensions indicate what device is being emulated. There are three valid extensions:

Note that a zip file needs to contain exactly *one* ROM, and not in a folder.

Once you have installed SuperNES on your Pre, click on it from the launcher to see short instructions on how to install ROMs, which we'll explain in more detail here.

Now connect your Pre to your computer via USB mode. Once the Pre shows up on your computer, open it. You now should be at the "root" of your Pre's storage. If you look at the folders in the root, there should be a few including the "wallpapers", and "ringtones" folders. Create a folder called "snes" (no caps). Click on that and inside that create a folder called "roms" (again, no caps). Copy the ROMs from your computer and move them here. DO NOT put the ROMs (.smc,.zip) in folders within the "roms" folder.

SuperNES cannot create these folders for you due to the 1.4.5 fstab bug.

SupeNES also allows you to customize the controls to fit what you find most useful!

Note Due to the pre's keyboard limitations, some keys cannot be detected when pressed down at same time (j/k is an example of such a pair). Keep this in mind, it is not a bug in SuperNES. Also the pre likes to ignore adjacent key presses as an attempt to aid in typing accuracy.

This is a list of games and how well they run. PLEASE include a version number (on rom selector) when adding entries! To see the emulation speed percentage, enabled "Show speed" in the menu! All Entries please in Portrait Mode without Touchscreen Control!